The season is over for 8 teams, many of which had shocking results (Go Blue Jackets!). This means that for many, the best option is look towards the future. One very exciting prospect occurring in the near future is the addition of an expansion team in Seattle in 2021. Not only will a new city help grow the game, but it will make for an even 32 teams in the league, with 16 being in each conference.

While many may complain about the disregarding of their city, there is an intense research and bidding process that results in this decision being made. So I decided to do some research about the history of expansion in the NHL and discovered the team that almost occurred in Baltimore, Maryland.

I’m currently living in Baltimore and the closest NHL team is the Washington Capitals with its AHL farm team being located in Hershey, PA. I always wondered why Baltimore, a decent sized metropolis a train ride away from DC, wasn’t home to any professional hockey team connected to the Capitals. Doing more research I discovered that Baltimore was home to a AHL Team, ECHL and other various leagues, but never lasting for more than a few years. But then I discovered Baltimore was a candidate for an NHL team in the 1967 expansion which included 6 new teams and just missed out on being the home for a new franchise.

In 1963, the support for an NHL expansion was growing, and by 1965 the blueprints for a major NHL expansion were revealed. At this time, Baltimore was the sixth largest city in the U.S. and was home to a passionate hockey base for an AHL team at the time, making it a big attraction for the league. However, in the end, to the shock of some, Baltimore was passed over, citing issues with facilities- mainly their arena, the Baltimore Civic Center.

At first glance, this is a simple story; a city vied for a professional sports team and was denied. However, when looking at the location and history, there is a lot more to it. 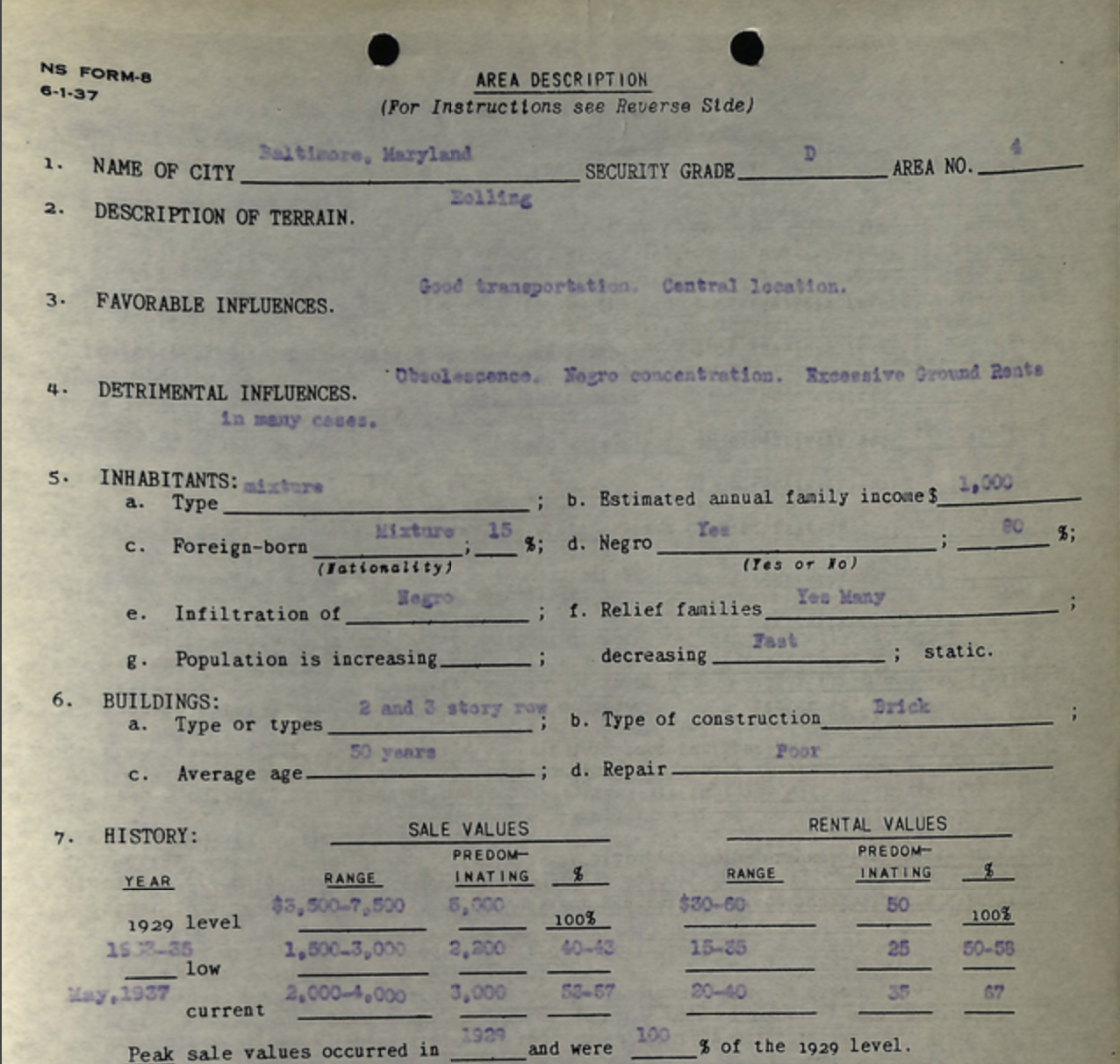 In the 1960s, America was witnessing the height of the Civil Rights Movement and according to the 1960 census, Baltimore City’s population was roughly 35% African-American (in comparison, roughly 13% of all Americans are African-American). Housing segregation is an often ignored aspect of the Jim Crow era and Baltimore was no exception to its consequences. In the 1930s, as a part of the New Deal housing policies the Home Owners’ Loan Corporation or HOLC, went around America and in a process called red-lining, created color-coded maps of metropolitan areas that deemed sections of the city worthy or unworthy of investment and the risk involved. Red depicted the “worst” parts of a city and the cited reason for avoided investments in an area was the presence of African-Americans.

The presence of African-Americans alone in neighborhoods would decrease the value of the entire neighborhood due to its white residents refusing to live with non-white neighbors and selling their property quickly and at a loss in order to get away. This allowed white people to claim that African-Americans were the reason for value depreciation when in reality it was their own biases. As a result, discriminatory housing codes were strictly enforced.

The above image is the map of Baltimore that the HOLC created in the 1930s. The Baltimore Civic Center, now the Royal Farms Arena, is located at the edge of the striped section, marking it as a commercial area. The surrounding areas are marked as red and undeserving of investment due to “Negro concentration”. Houses were kept in poor condition and opportunities were stifled because the HOLC determined that black people were not worthy of outside investment. Due to stifled economic opportunities and continual discrimination, today Baltimore is even more segregated than before. Hearing that facilities were cited as the main reason behind the lack of an NHL team in Baltimore is not a surprise when learning the context. Knowing this makes it especially heartbreaking for the city of Baltimore with its residents being continuously ignored by outside investors for reasons beyond their control.

When reflecting on the history of the NHL it is easy to look at events like the 1967 expansion as separate from events happening in America. However, the history of sports are intrinsically tied to cultural and political shifts in our country and it is enlightening to notice the rich history that impacts our sports today.

Hi! I'm Georgia McFarland and I'm currently a student at Johns Hopkins University majoring Psychology and Africana Studies. I grew up in Ohio and am a fan of the Blue Jackets (and the Browns), so winning anything in the post-season is not something I am super familiar with. View all posts by Georgia McFarland