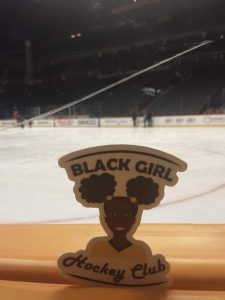 Black History Month, BGHC and You

Somehow, with a unique combination of love of hockey and Black culture, the Black Girl Hockey Club has the chance to become something greater than just me and my hockey social media rants. Over the last year, Black girl hockey players, fans and moms have come together to show the National Hockey League and the world that we exist and that we are here to stay. Because of you and your commitment to a sport that hasn’t always loved Black folks, the BGHC  was featured in the American Legacy Black Hockey History tour bus; we got the chance to visit 4 different arenas during Black History Month; we represented with the National Hockey League at the Canadian Embassy and celebrated Willie O’Ree; BGHC has been featured on television, podcasts and in print. Our Color of Hockey brother, William Douglas, started a gig writing with NHL.com and represents us on that level now. Sisters, brothers–we are seen–so what are we going to do about it?

On February 27th, because of you all, I got the chance to go back to Washington D.C. and attend a special celebration of Black hockey history at the Canadian Embassy. In our nation’s capital, discussing diversity, women and hockey with some of the most influential hockey folks in North America, was a surreal experience. To be honest, the invitation was a surprise. When I received the invite to the Embassy, I asked the BGHC fam to help me get there, and you made it happen by funding the trip on GoFundMe page in less than 24 hours. Truly, BGHC is my love child–an endeavor began in order to community build and bring folks like you and me together, united by our love of hockey. Whether you are Black, white, brown, male, female, gay, straight, bi, trans or someone intersecting multiple identities, the Black Girl Hockey Club is a safe space for you. We are those who are aching for change; who want hockey to truly be for everyone. We see that the sport–on the ice, in the stands and behind the scenes–has the opportunity to be better and we are here to do something about it.

That’s my mission, that’s the mission of the Black Girl Hockey Club, and, if you’re here, it’s now your mission, too.

A post shared by BlackGirlHockeyClub (@blackgirlhockeyclub) on Feb 27, 2019 at 6:29pm PST

The Future of BGHC

Folks have asked me where our next meetup is. Honestly, it’s March, friends. Playoffs are coming, teams have to buckle down and focus on that playoff push. There are no meetups planned for the rest of the 2018-19 season (save an impromptu trip to DC during playoffs- @Capitals-call me). Currently, BGHC is looking toward the future and I’m trying to figure out how we can become more than just a fan club that gets together to go to games and do some tangible good in the Black hockey community. March 1st, the BGHC Newsletter launched and with it, one more way for hockey fans of color and our allies to keep in touch with one another. During the off season, I am working on a meetup schedule, as well as a few other endeavors that I hope will pan out by the time the new season begins. If you’re interested in getting involved, please don’t be shy. Check out our contact page, find us on social media, and keep an ear out for the next BGHC Big Thing.

Black History Month isn’t the end of the BGHC–we are just getting started!

If you’re so inclined, you can help out with financial stuff here and here. If you want to sign up for our newsletter so you know what we’re up to in the coming months, you can do that here. If you’d like to read more about what BGHC is all about, visit our News page here.