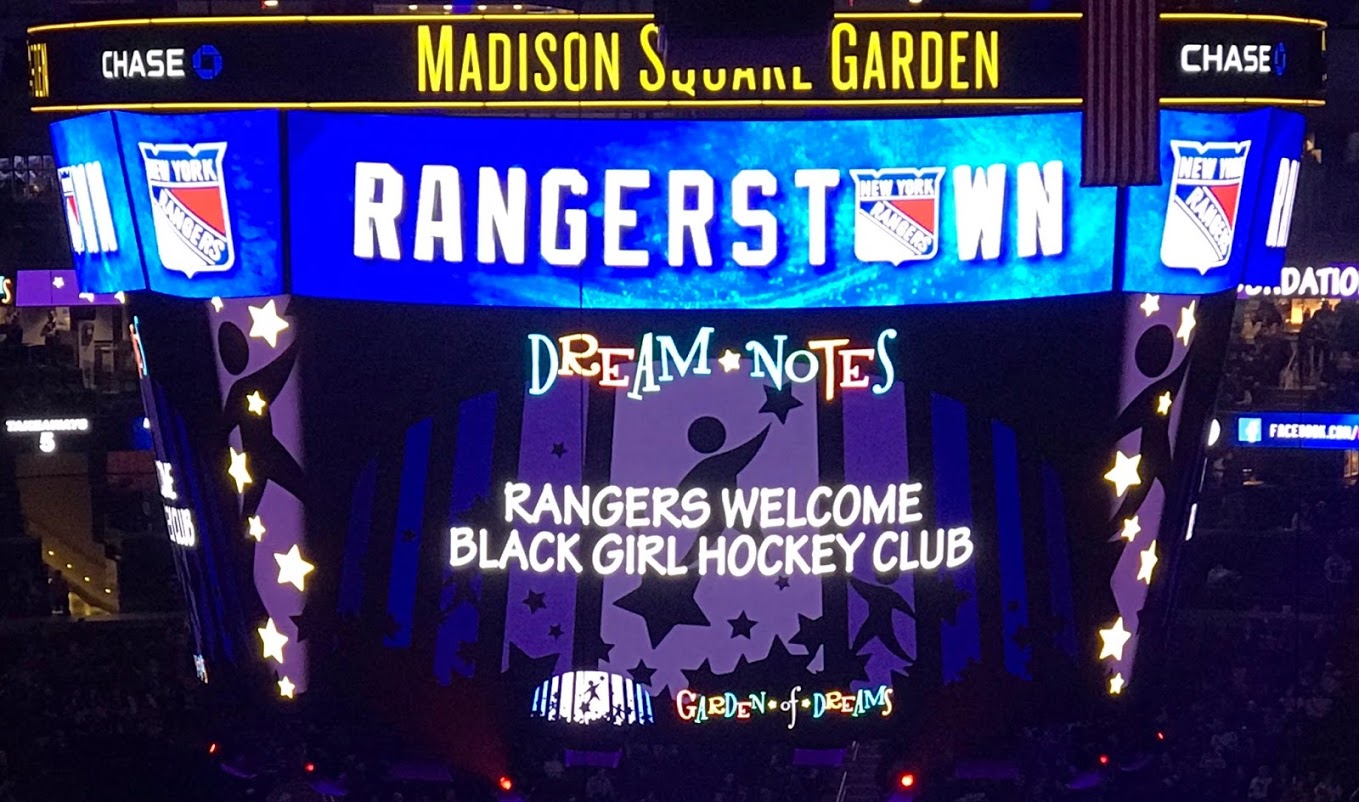 February is Black History month, and this year, the NHL is celebrating the achievements of Black hockey players with the American Legacy Black Hockey History Tour Bus, as well as highlighting Black hockey on their website. The National Hockey League invited Black Girl Hockey Club to the unveiling of this mobile museum in Harlem on February 1st, to tour the NHL offices and then to attend a New York Rangers game the next day. Although I couldn’t make it to NY, BGHC attendees, along with Corrine and Bill Douglas from Color of Hockey Blog, had the once-in-a-lifetime chance to share Black Hockey achievements with the kids from Ice Hockey in Harlem and tour the Legacy Bus with Anson Carter, Kwame Mason and others.

Not only did BGHC get experience the first ever hockey exhibit highlighting the accomplishments of Black players in the game, but members received a special tour of the NHL offices in New York City from Gary Bettman–the Commish–himself! Bettman spoke with BGHC at length about various topics such as Women’s Hockey, inclusivity in hockey and, of course, the 2018 Stanley Cup Champions, the Washington Capitals.

Helping to show that #HockeyIsForEveryone, the @BlackGirlHockey Club attended a @NYRangers game & was treated to a very special experience.

The next day, BGHC got to tour Madison Square Garden, check out the ice and watch warmups from a prime position on the glass. Members also attended a meet-and-greet with right wing  Pavel Buchnevich and center Vladislav Namestnikov post-game.

Our girl @fatousadio is having a blast in NYC with #BGHC! Selfies with Bettman and 2 minutes for roughing? Is he okay? #hockeyisforeveryone

A post shared by BlackGirlHockeyClub (@blackgirlhockeyclub) on Feb 2, 2019 at 3:38pm PST

Only a few days after the NYC trip, Black Girl Hockey Club traveled down South for a double header of men’s and women’s hockey at Bridgestone Arena in Nashville. I’ve always wanted to see an NWHL game, but living in California doesn’t afford me many opportunities to do so. When I heard that the National Women’s Hockey League had decided to hold their annual All Star Game and Skills Competition in Nashville, Tennessee the same weekend as a Nashville Predators/St. Louis Blues game, I knew BGHC had to be there. I knew I had to be there.

A post shared by BlackGirlHockeyClub (@blackgirlhockeyclub) on Feb 9, 2019 at 11:52am PST

With the help of the UH-MAY-ZING Danny Butler, from Ford Ice Center (who initially contacted me months ago about attending a Preds game), the Predators PR staff and the NWHL, Black Girl Hockey Club had a hockey holiday full of fun, food and friends. On Saturday, February 9th, members and friends of the Club took to the Bridgestone Arena ice for an hour of skating before a special screening of Soul on Ice on the jumbotron. After the film, Erica Ayala, women’s hockey journalist, moderated a Q&A panel featuring Kwame Mason, Bill Douglas and myself.

After the screening, our group headed down the highway to Ford Ice Center, where we had VIP seating to watch the NWHL All Star Skills Competition, featuring friend of the Club, Blake Bolden, who took home accolades for hardest shot (82MPH) and stopped by our group to sign autographs and say hello.

@predsnhl @nwhl.zone @sportblake @fordicecenter @bridgestonearenaofficial y'all know how to treat a gal down South! Thanks for showing #BGHC a good time. We love #smashville!!! #hockeyisforeveryone

A post shared by BlackGirlHockeyClub (@blackgirlhockeyclub) on Feb 10, 2019 at 5:49pm PST

The Legacy Bus also made it down to Nashville with BGHC, and so members again had the opportunity to enjoy this mobile museum, which is still making its way up and down the East Coast throughout the entire month of February.

On Sunday morning, the Preds played the St. Louis Blues in a matinee game that was quickly followed by a meet and greet with Preds players Filip Forseberg, Pekke Rinne, Roman Josi and PK Subban and then straight on to the NWHL All Star Game.

After a whirlwind weekend, BGHC is not finished yet! We head back up to New York for an Islanders game at Barclay Center on February 16th. The New York Islanders will hold their Hockey Is For Everyone game and has invited, not only the BGHC, but organizations like the Islanders Girls League, the Long Island Blues and the Long Island Roughriders, all hockey programs for marginalized communities in the local area.

We round out Black History Month with a salute to the National Hockey League, who are working hard to be inclusive toward Black hockey players and fans. It’s a welcome shift for HIFE month, and the Black men and women I have encountered are so glad to finally be included in the narrative of hockey in North America.