BGHC Does DC: The Inaugural Meetup

It’s taken 7 days to write this post, but the actuality of the situation hasn’t quite set in yet. A week ago, I was in Washington DC; getting picked up at sunrise by William Douglas of the Color of Hockey blog; grabbing brunch with Metro Riveters player, Kelsey Koelzer and her mom; exploring Black history with Kim Davis, NHL VP; shooting promos for the Washington Capitals with Kwame Mason, producer of the Soul on Ice documentary; a food reception hosted by Capitals part owner, Earl Stafford; hanging out with a few choice Capitals players post game. I mean, come on. Who could have seen that coming? 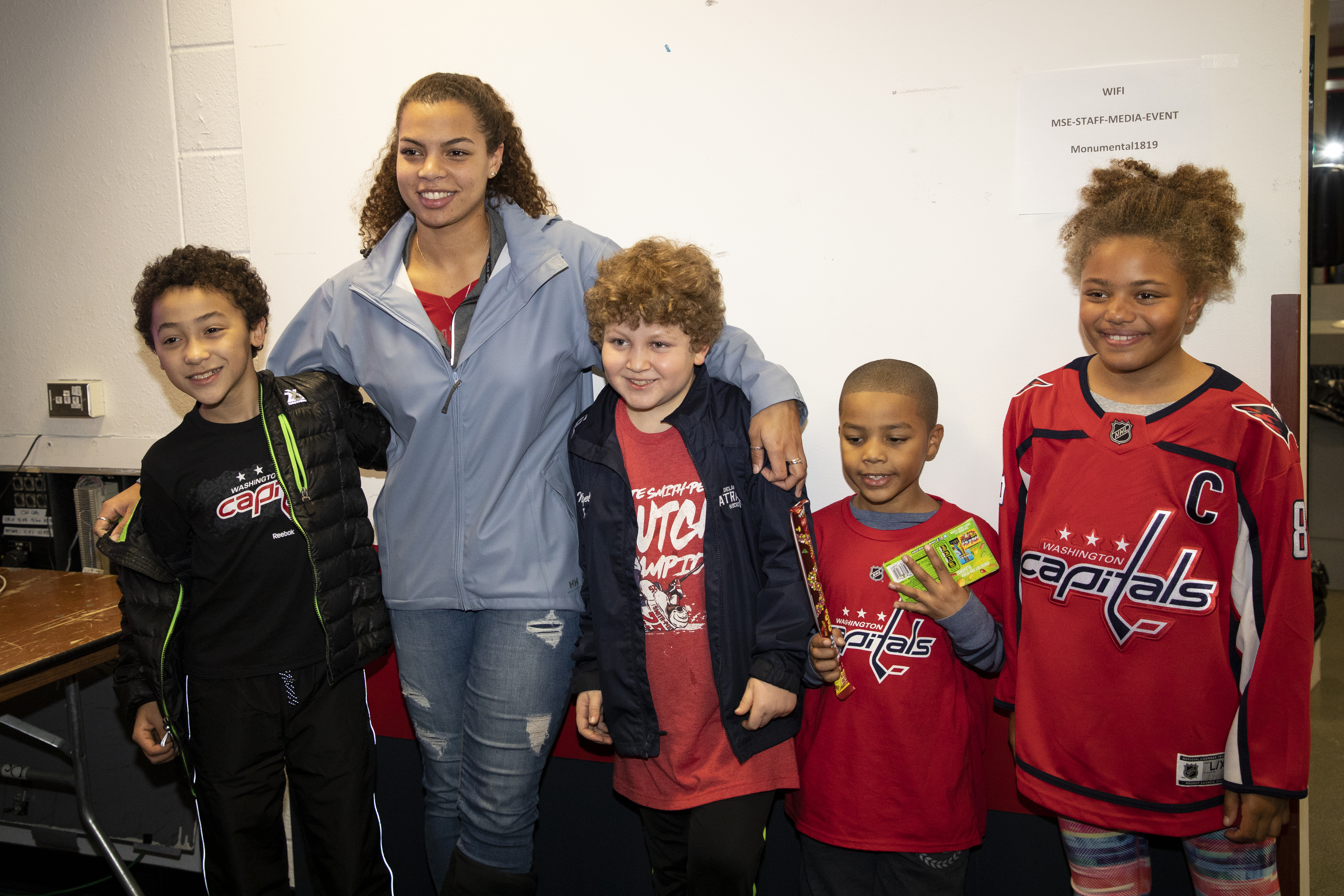 On December 15, 45 women, their friends and family joined Black Girl Hockey Club and Color of Hockey blog at our inaugural meetup in Washington DC. This event had been in the works for months. As I look back, I can almost see the snowball turn into an avalanche.

What I tentatively call the “Black Hockey Research Project” began because of my own feelings of isolation in hockey. As a writer and part time journalist, curiosity fueled my research. As an educator and community organizer, plans to start unifying folks began to form in the back of my mind. I wanted to know who else felt isolated in loving hockey because of gender or race and I wanted to do something about it. I began reaching out to minorities, especially women, and found out that so many loved hockey, but never felt quite comfortable or safe in arenas, on the ice, or even on social media. I sent out a call, meant to unite the marginalized hockey fan, in the form of a survey. It’s still active, if you’re interested.

The survey led folks to start asking me what I planned to do with the information. You know what? I had no idea. At the time, I ran my own pop culture blog and had for 5 years, but my work felt stagnant. I wanted to do something bigger and more personally satisfying, so I walked away from a sure thing to focus on my research. I decided that the BIGGER thing was going to be…a book. Why not? No one has written about Black women in hockey, and I had amassed so much information. Over the course of a few months, I spoke with fans, players, professors, filmmakers and other writers and discovered that there are Black folks who love hockey, more intensely and for much longer than I. Still, as I transcribed hours of interviews and connected with more and more folks of color, I started to realize we need our own space, a community for Black folks in hockey. 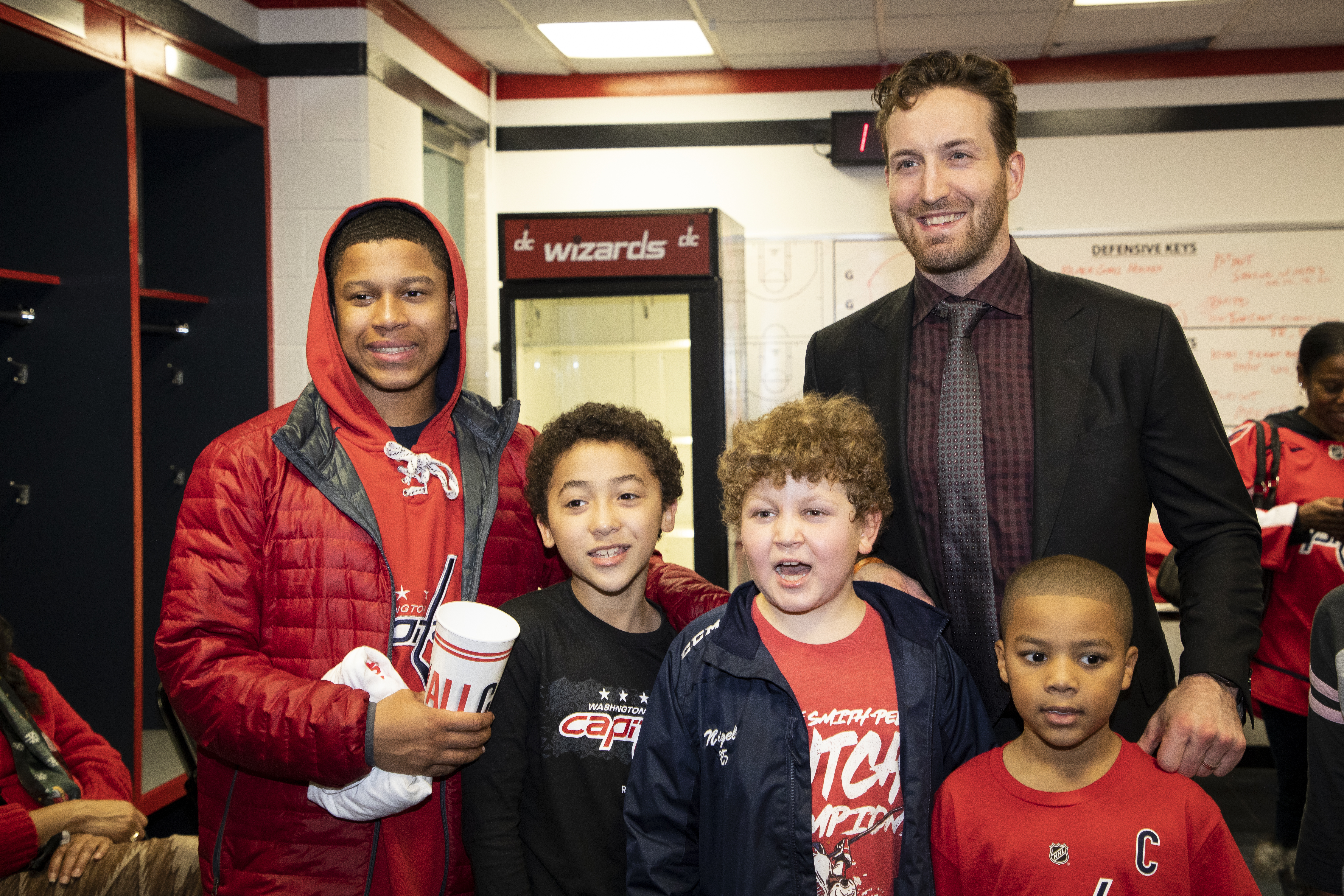 It Takes A Village

Now, if you’re a fan of hockey (and you probably are), you know that the sport is ALL about working together for a greater goal (aka the Stanley Cup). Hockey values the team more than the individual and so goes the mentality of the ownership, coaches and players as well as the fans. If you’re Black, you also know that Black women are the backbone of our community. The mothers and matriarchs support and build up our families, churches, organizations and schools. We are the village that raises a child. What better way to strengthen the love of hockey in the Black community than to create a safe space for Black women hockey fans? Show our sons, fathers and brothers that we are valued and watch the interest in hockey spark in our households. Thus, the Black Girl Hockey Club was born.

What started as a group chat on Twitter between 5 Black girl Penguins fans turned into a movement. When I reached out to Bill Douglas (Color of Hockey) and his wife, Corinne about planning a meetup for Black girl hockey fans in their hometown of Washington DC, they assured me we could gather a group of at least 20. We advertised on Twitter and Instagram, but also began a very targeted email campaign to friends and hockey fans all over the United States who we thought might be interested in participating. Somehow, our flyer ended up on the Facebook page of a hockey rink out in Rochester, NY. For me, the emails from hockey moms confirming their attendance at the game solidified the importance of a safe space for Black women in hockey. By the end of November, we had over 40 confirmed attendees planning on joining us at a Capitals game in DC. These women purchased game tickets, train tickets and plane tickets before we ever knew about any pregame reception or postgame picture session. All this group ever wanted was to go see a hockey game together. 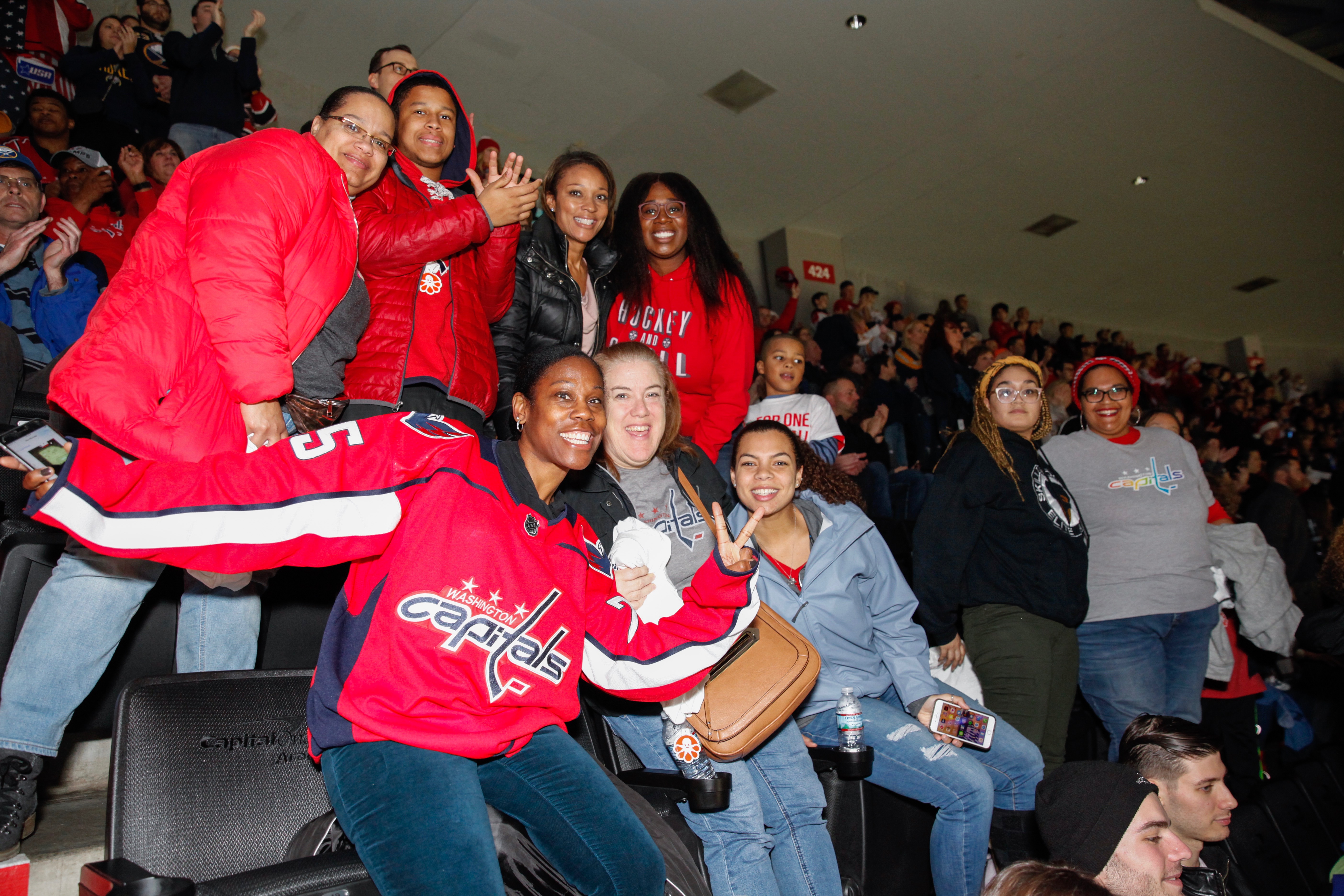 With the help of the Washington Capitals organization and the NHL, the weekend of December 14-15 turned into so much more than just a hockey game. I was encouraged to pitch the idea to the National Hockey League, so in the middle of a work week with my daughter in tow, I drove an hour in traffic to meet for coffee with a representative from the NHL. They loved the idea and wanted to help make the outting special for the women and kids who planned to join us. I was asked to give a wishlist of things to do and came up with a few cool things to do over the course of two days.

One of the main activities I wanted was to get our group into the Smithsonian Museum of African American History and Culture. Not everyone who visits DC gets the chance to visit this historic museum. Tickets are free and go on market months in advance. By the time I even knew this trip was happening, tickets were already gone. Kim Davis, VP at the NHL and all around badass Black lady, made sure we got the chance. Her office arranged a tour led by sports curator, Damion Thomas. With a group of about a dozen or so, we made our way through the layers of history at the NMAAHC, ending at the cafe, where we all sat down to decompress and replenish together as we contemplated our ancestors.

A post shared by BlackGirlHockeyClub (@blackgirlhockeyclub) on Dec 14, 2018 at 1:41pm PST

On game day, rain poured from the sky as our group met downtown with Kelsey Koelzer and her mom for brunch. At Matchbox, my sister and I sat down with Corrine Douglas, her daughter Nora, Kelsey and Kristine Koelzer for an intimate meal. We talked hockey and parenting, school and Christmas. After, we headed out into the rain to the National Portrait Museum, where we got to fawn over the new Barack and Michelle Obama portraits and take some pics with our favorites.

A post shared by BlackGirlHockeyClub (@blackgirlhockeyclub) on Dec 15, 2018 at 11:27am PST

At the museum, we ran into a few of the attendees who had the same idea–to get out of the rain by hanging at the Portrait gallery, which is right across the street from Capital One Arena. When we finally walked over to the designated meeting spot, we began to spot Black women in Capitals gear, kids hanging around their ankles, looking excited and out of place. As our group grew larger, it began to hit me. We had pulled it off. I had pulled it off. Black women, their kids, sisters and friends began to gather, and the air filled with excited energy. We had been asked by the Washington Capitals to arrive 2 hours before puck drop for a food reception hosted by Capitals owner, Earl Stafford. When the majority of the group had arrived, we were escorted upstairs to a private conference room where we met Stafford, multiple NHL mascots, official NHL referees, including the ONLY Black ref in the league, Shandor Alphonso, as well as Lonnie Bunch, founding director of the NMAAHC. We had accomplished our goal of creating a community within hockey, and what a wonderful one it turned out to be!

I couldn’t tell you much about that two hour pregame meet and greet, to be honest. My sister held my purse and made sure I had a sandwich for later, while I talked to reporters and PR people from various outlets and ran across the arena with Kwame Mason, Kim Davis and Kelsey Koelzer, to tape some video for the NHL. What I do remember is a room full of Black moms and kids, enjoying themselves and getting the VIP treatment from the League and the Capitals organization.

What I’ll never forget is the game. And what an AWESOME game the Caps and Sabres gave us–OT and a shootout with Ovechkin getting the GWG?! YES!!! Free hockey is always a blast, but it felt as it the Caps were giving the BGHC a show to remember, that night. I may have missed the last 5 minutes of the first period because I had to run down to ice level to give a LIVE INTERMISSION INTERVIEW but, other than that, I was glued to my seat. After, when we were all tired but wired, we were led down to an empty locker room, where we got to meet Brooks Orpik, Madison Bowey, Nick Dowd, Brayden Holtby and Devante Smith-Pelly. The fellas stuck around to sign jerseys, take pictures and give hugs to a room full of unlikely hockey fans. While we had them, I made sure to let Bowey and Smith-Pelly know there are so many Black hockey fans out there who root for them and wish them well. I also made sure to thank Holtby for his work with the LGBT community, and showed off my Rock the Rainbow tee I had purchased from one of his shirt campaigns a few years ago. 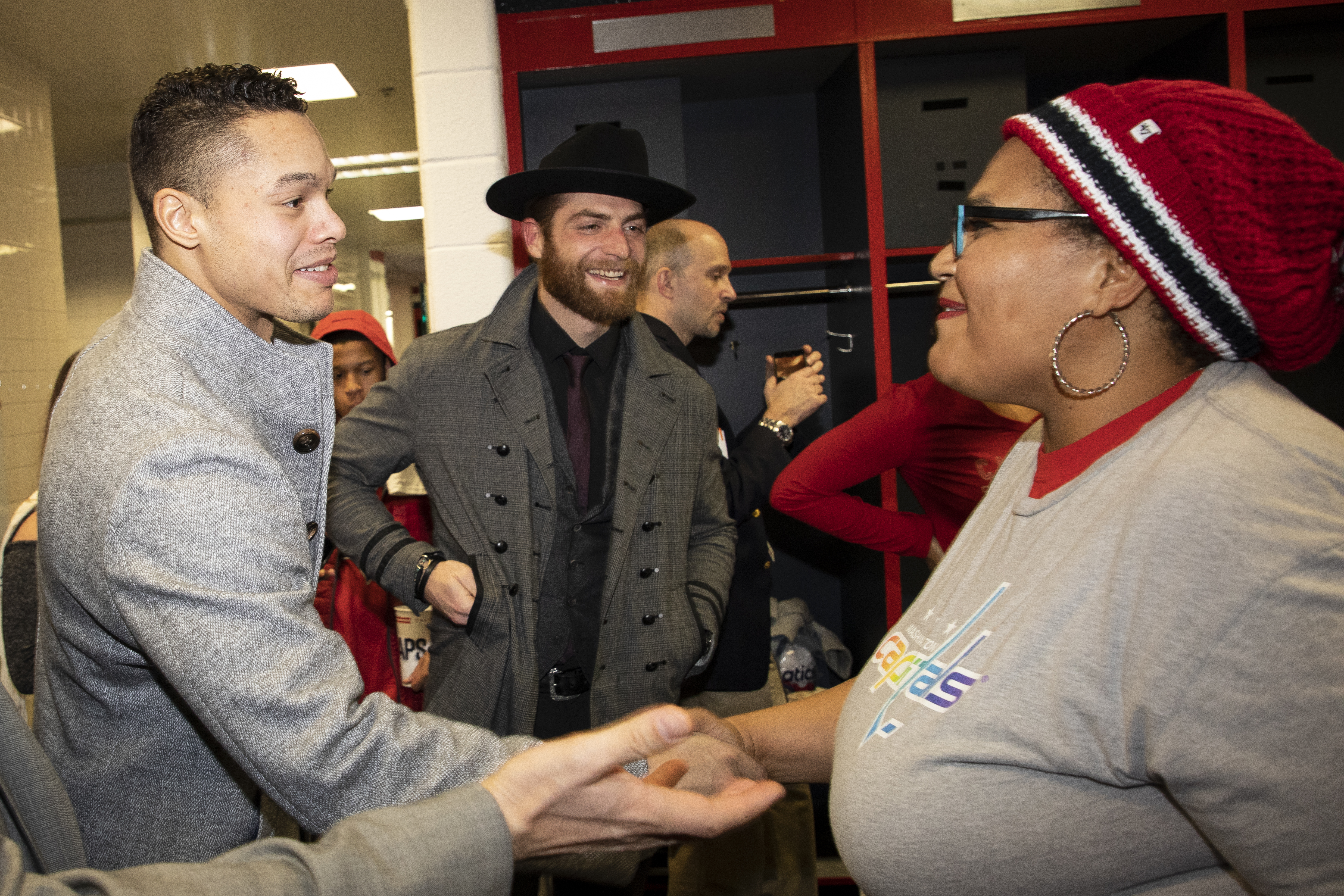 As I look back on the trip, I realize that the Black Girl Hockey Club is filling a gap in the hockey world. The NHL, Color of Hockey and the Washington Capitals all saw it, even before I did. What a blessing to be able to bring Black women together and I cannot wait for our next meetup on February 10 in Nashville. I hope to see you there!

*all photos courtesy of: WASHINGTON, DC – DECEMBER 15: The Black Girl Hockey Club meet members of the Washington Capitals after a game between the Buffalo Sabres and Capitals at Capital One Arena on December 15, 2018 in Washington, DC. (Photo by Patrick McDermott/NHLI via Getty Images)*

7 thoughts on “BGHC Does DC: The Inaugural Meetup”