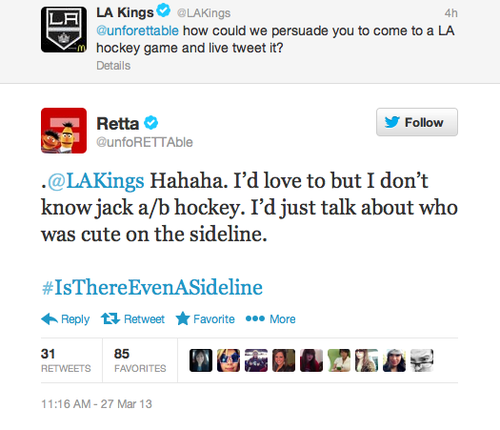 Retta, best known for her role as “Donna” on the television show Parks and Recreation, has been a Kings hockey fan since 2013 and shows no signs of letting up. In 2016, Retta wrote a piece on LetterLenny.com, highlighting the development of her hockey obsession titled, “How I Became a Hockey Fan”, which was later featured on the Kings website.

I love me some Kaaannnngggsss. I know that meeting a black woman with a love for hockey is a bit like stumbling upon a unicorn in the woods … or a unicorn anywhere. I’m sure it’d be just as surreal finding a unicorn in downtown Chicago. But here I am.

During the 2018 playoffs, Snoop narrated a series of promotionals for the NHL, and performed at the 2017 January All Star Game in Los Angeles. Although Snoop is from Los Angeles, his favorite team hails from Pittsburgh and he’s got a history with Mario Lemieux and his “dawg”, Sid the Kid.

Even though @SnoopDogg is doing these videos for all playoff teams, we know he has real love for Pittsburgh. 💛🖤 pic.twitter.com/0ZfDyExRAl

Although Spike Lee hails from Brooklyn, he’s been known from time to time to cross the bridge and attend a few New York Rangers games at Madison Square Garden.

Spike even brings his kids to games and participates in the age-old tradition of swinging a white towel to confuse the enemy during playoff season.

What’s not to love about the bright lights, exuberant crowds and this incredibly fast-paced game? Hockey is amazing.

If you have a favorite Black hockey fan, let us know in the comments below.

Want to be part of the BGHC research experience? Fill out a short survey here.

One thought on “3 Famous Black Hockey Fans We Love”