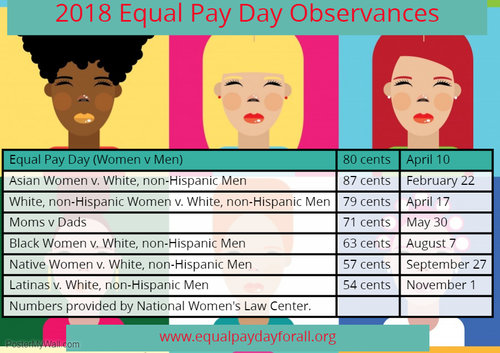 Let’s Talk About the Wage Gap for Black Women

Tuesday, August 7 is Black Women’s Equal Pay Day. This is the day that, on average, Black women must work up until in order to earn as much as a white man earns in a year. That is 7 months and 7 days, if you’re doing the math.

Wage inequality isn’t just something Black women have to deal with. White women make less than their male counterparts, and there is a definite glass ceiling that exists for women, in general.

Imagine being a gold medal winner and THAT is the salary range of your North American professional league.

With the gender bias that is evident in sports across the board and the racial inequality within professional hockey, I can see why there are only TWO Black women playing in the NWHL. I can understand why the first African-American female hockey player, Blake Bolden, decided to move overseas on 2017 in order to play hockey with a European league for a year.

A Black woman in the world encounters road blocks due to gender and race. A Black woman playing a white man’s sport is an entirely different ball game, so to speak.

What can we do to break these very real boundaries that have been set up for Black women to measure our success?

I would ask that white male allies listen closely and be advocates.

I would ask that white women participate in intersectional feminism at all times, even when no one is watching.

I would ask that Black women create a community within the community in order to help facilitate growth with one another.

I would ask that Black men cherish Black women and help us succeed inside and outside our communities.

When we can do these things together, in hockey, in the job place, our churches and social circles, that is when change starts to happen in our institutions, our homes and our hearts.